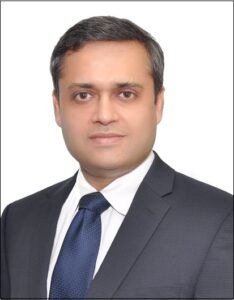 Cleared IBC Examination in May 2018

Ashish Khandelwal has been in practice since 1995 and leads the Audit and Assurance practice at Shah Khandelwal Jain & Associates, carrying on his father’s legacy.
His expertise lies in statutory audits of companies, banks, insurance companies, partnership firms, trusts, etc. & internal audit assignments of manufacturing and software companies.
He has also helped start ups and multinationals set up their initial operations in India, has pioneered the setting up of outsourcing practices in India and was awarded for the Best Indian Outsourcing Practice by Corporate International, UK.
Ashish has managed several large engagements in India and internationally across diverse industry verticals like Financial Services, IT/ITES, Manufacturing, Real Estate and Retail.
He has been an Executive Board member & Treasurer of various organisations and is currently the Honorary Member of The British Business Group, Pune.
Ashish has been a member of the Expert Advisory Committee for 2017-18, the Research Committee in 2018-19 and the Research Committee and the Committee on Public and Government Financial Management of the Institute of Chartered Accountants of India, New Delhi.
He is presently a member of the Research Committee and the Committee on Public and Government Financial Management of the ICAI.
He is a life member of the Indian Council of Arbitration and an independent Director on the Board of a closely held Public Company. He has also been on the Board of Trustees of Charitable organisations.

SIGN UP TO RECEIVE THE LATEST SKJ NEWS AND INSIGHTS